Now taking you to another comic...

A low angle shot of Sharpie the undercover detective, standing the Smugastut the guard's head. Sharpie has his arms crossed, while Smugastut doesn't look too amused. Giant ball-shaped bird with long legs is running in the background, kicking off houses.
Sharpie: “I hav’it! Chicky’s lookin’ for a dance partner!”

Zooming out of Sharpie and Smugastut, three guards stand in front of the pair, having their backs turned to the viewer. From left to right: Tuple, unknown guard, second unknown guard and Sharpie-Smugastut tower.

Same shot as before. Tuple and the two unknown guards have turned to each other, discussing something. Tuple looks confused and asking, the unknown guard is making circle motions with their hands and the second unknown guard looks to be smugly suggesting something. Sharpie and Smugastut keep standing in the background.

Same shot still. The three guards nod in agreement at each other. The two unknown guards point at Tuple.

Same shot even still. The three guards have turned back at the pair.
Tuple: “We don’t get it.”
Sharpie: “...”
Smugastut: “Yeeaah, what?”

The realm needs YOU! To spread the word: 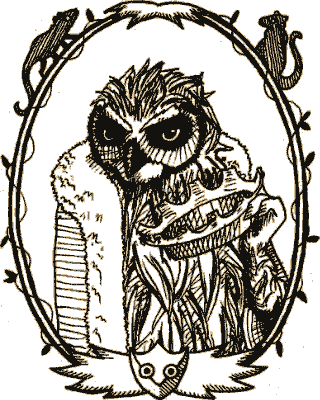 Dealing with the typical DLEP members is so tiring. You have to explain all the obvious things to them.

Read it in Russian